SALE! 13% discount on all F1 race car models in 1:43 scale from Minichamps, Spark and Brumm

Continuing our analysis of the differences between die-cast and resin models, we have prepared an interesting interview for you, with Clive Rigby, one of Spark's stakeholders, that was published in the English magazine modelcollector.com. (Original wording "What's the deal with Resin" edited)

Editor: First of all, could you explain to readers who don't yet know what resin is? E.g. what is it made of and how does the process differ from the production of a die-cast (metal) model?

Clive Rigby: It's actually a by-product of oil. Resin is better known from products like Araldite, that is used to repair objects where two types of resin are mixed into a paste, that then solidifies in different proportions. It is actually a two-component plastic, that is mixed and then poured into a rubber or silicone mold, where it then solidifies.

The process begins with making a template - an original that looks exactly like a real car or part of it. The template or master piece is produced by either the old or modern method. The old method is to literally cut the template, the new method is to make the whole template by computer, stereolithography, or 3D printing. We use both methods depending on what data we have. For example, when working with a car manufacturer, such as Mercedes or Peugeot on a modern car, we usually get all the data from them in digital form. Subsequently, we transform the whole into CAD / CAM (Computer Aided Design / Computer Aided Manufacture) format. Of course, this data was used in the production of a real car, but we have to make minor modifications to it so that we can produce models in individual scales. The art of modeling would be much simpler if the subject were perfectly feasible only by lowering the scale, but unfortunately due to parallax, this process is much more complicated.

But let's go back to production, we make silicone molds from the template. Resin is poured into the hollow parts of the mold. We put these molds in a vacuum chamber to get rid of all the bubbles that got into the resin and let them solidify.

These molds are not only elastic, but can consist of several, separable parts, so it is possible to make several parts of a given model from one mold. 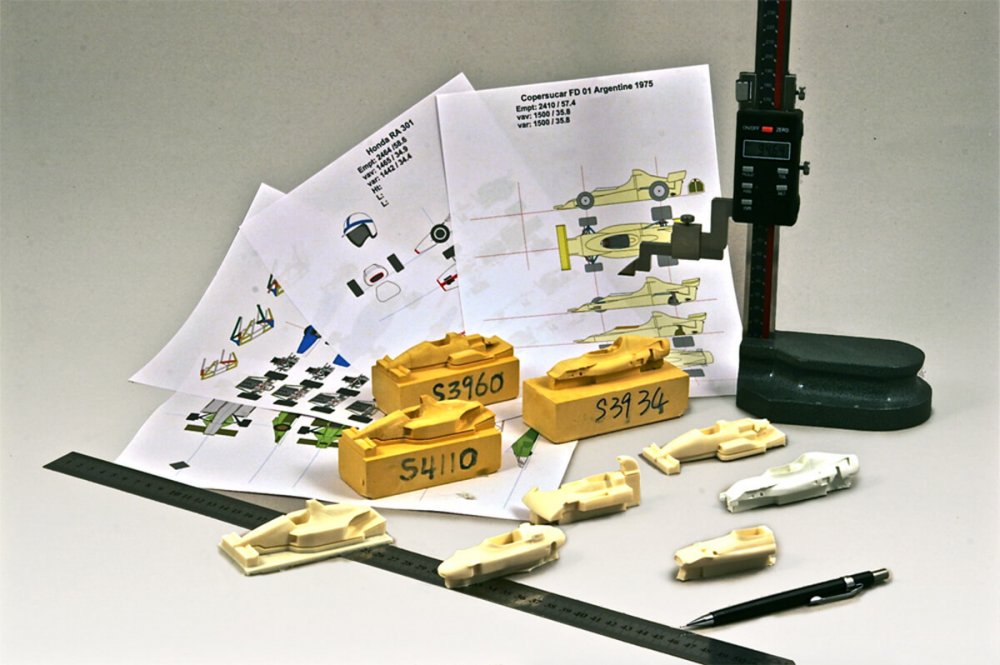 Editor: Does that mean it's a much less mechanized process than we'd expect?

CR: Yes. The main difference is that the basics of the production of resin models (compared to metal) are much more rooted in hobby modeling. It all started in households. It can literally be done at home - in your own house, alone, in the kitchen - and many have done so.

Many small businesses started like this. For example, Hugo's father (Hugo Ripert is a co-founder and major shareholder of Spark) initially produced models in this way.

Editor: So what is the first, easiest way to distinguish resin models from metal ones when we see or hold them in our hands for the first time?

CR: Most people don't recognize the differences immediately. But if I showed you an unfolded and unpainted set, you would be able to distinguish it immediately. The raw resin has a pale, yellow-brown color, while the metal model before painting has a distinctly metallic appearance.

Editor: I know one very easy method, when we unscrew the resin model from the stand to take a picture in the "News" column, we often see a powder similar to chalk powder falling out.

CR: Yes, it's resin powder that falls out from the bottom of the model in the parts where the screws are attached.

Editor: What are the advantages of resin production over metal?

CR: Production from resin is much simpler, and on the one hand, modifications can be made cheaper. And that's important - especially important in motorsport models. In any given season, on the current car there are made many modifications from one circuit to another. For example, a car deployed in Monza and the Nürburgring differs only in minimal modifications, but the car for Le Mans already has much more significant changes. Basically, several air intakes are cut out, different air deflectors are added, rear wings of different sizes, etc.

These modifications are much easier and cheaper to make from resin than metal. In the case of metal models, we would have to cut steel molds. Thus, if e.g. we have the given car without a fin, it would be practically possible to add it, but removing it would cause much bigger problems.

It is also important that customers can order the production of specific cars in very small quantities from us. God knows how many Porsche modifications we've made in recent years. Porsche has been one of our clients for many years, because on request we can easily produce e.g. 500 pieces for club owners, or for a special event, that would be excluded in the case of metal models.

But if the manufacturer orders, let's say 10,000-20,000 pieces, then we will definitely decide in favor of metal models.

Editor: Does that mean you also produce metal? I was convinced that Spark only produces resin models.

CR: A lot of people think so, but in fact we produce metal models as well as resin models. We don't care what we make models from, but to make our models look good.

Editor: Does resin production have any disadvantages? If so, what are they?

CR: Resin models are much more fragile. But basically in certain parts - the mirrors break off very easily, the wings are very sensitive - all models are fragile.

Editor: How many models do you produce in an average production cycle?

CR: As soon as we have a new model on our design desk, we inform our distributors, who can immediately estimate the number of orders and send us feedback. Then we can start production, because we do not have to worry about overproduction - which is never good, because it can lead to the accumulation of stocks and the loss of collectors' confidence.

Of course, not every collector pre-orders models, and many of them don't even realize that they really want the model until it's sold out. If we feel that the demand is high enough, then sometimes it happens that we re-produce the resin model.

The average production cycle of resin in our country is around 1000 pieces, but some models, especially Land Speed ​​Record cars are produced in much lower quantities. From British Steam LSR cars, for example, I don't think we would have released more than 600 units, and until the sponsor requests re-production, I doubt we would produce them ever. It's a fantastic, really weird looking car and it consists of much-much more small parts than would be expected from an average (commercial) model, but we're fans!

Editor: This industry seems to be very intensive. Have you ever made models for other brands in your plant?

CR: Yes. I will not name, but yes, because even a few large brands have their own plant. Sometimes I get a little upset (laughs) because I look at one of our competitors and see that we have made their best models.

Editor: We have noticed that the price of metal models has risen sharply in the last decade, partly due to the constant rise in material prices and more recently due to the situation in China (such as changes in laws, rising wages, uncontrollable inflation, etc.), but why are resin models usually more expensive than metal?

CR: First of all, despite the fact that resin models are produced in hundreds of pieces and not in thousands, like metal, apparently intensive research, design, etc.  requires the same amount of work to be taken into account.

Second, and this is probably a more important aspect of being very detailed. Each of our models is hand-painted and folded manually with great attention to detail. Of course, there are also cheaper models, but there is a reason for that. You basically get what you pay for.

For example, in the case of cheaper metal models the wipers are only molded plastic elements; ours are made by photo etching, so they are much softer and more realistic.

Many 1:43 scale models on the market have exhaust pipes integrated into the molded plastic floor. Our exhaust pipes are much more often a separate part, made of small-diameter steel or aluminum pipes and glued to the floor.

Also, if we turn an Aston Martin, Ferrari race car or any Spark Le Mans car on that rear diffuser is located, we notice that each of the vertical parts of the diffuser is a separate photo-etched part, that is glued one by one. This level of detail means a big difference in the production of car models compared to diffusers pressed into the floors of cheaper models. Spark windows are not simple molded plastic elements inserted as a whole: ours are separate parts and are much-much thinner, thus giving the windows a certain degree of transparency and a proportional thickness, that is not the case with cheaper models.

Editor: Metal models should be kept at a constant temperature and protected from moisture and direct sunlight. Does this also apply to resin models? And could you advise our readers on maintaining their resin models?

CR: The color on a resin model will also fade when exposed to strong sunlight as on a metal one. If we place the model on the window sill, it will not take long and a visible fading will be created on the side that is directly exposed to sunlight. So from this point of view, keep the same precautions with resin models as you would with metal ones.

Most collectors are familiar with the problems of old pre-war models such as the Dinky Toys, where impurities in the metal form into which they were poured caused a kind of anode-cathode effect and eventually disintegrated. In this regard, we have not encountered a similar problem with resin models.

One of the reasons why it is good to have your own plant is that we can strictly check that everything is in order. In cases when we observe defects in the metal on several modern metal models, it is most often caused by a bad manufacturing process. For example, in some plants, deformed molds (failures) - probably because they were not perfectly filled - are only thrown to the ground in a pile. These pieces are then collected, melted and processed. But from the dirty floor of the plant can get any dirt, cigarette butts, pebbles, etc. get between the molds to be melted and subsequently into the new molds. These contaminants can then cause serious defects in the metal. And later the buyer will suffer the consequences of such treatment.

Editor: Do you think the future belongs to resin and metal models will become a thing of the past time?

CR: No, not at all. There will always be demand for both. As I mentioned, metal models are much more cost-effective in high-volume production cycles. But when we work with small amounts, especially in the case of motorsports and F1 cars, where we will probably need to make more mold modifications, resin is clearly a better choice.

We as collectors have no preferences whether the model should be made of resin or metal. Hugo and I have a large private collection and the only thing we care about is that the model is a faithful copy of the original.

All packages are shipped insured

ALL MODELS IN STOCK

WE WILL OBTAIN IT

Write us in the inquiry form which model you are looking for, and we will get it for you

EXCHANGE AND RETURN WITHIN 30 DAYS

You have the right to return the goods and we will refund you.

How to get news by email?

Tibormodel.com is available in English!